"The Shoppes at Sun Prairie"
aka "Prairie Lakes Shopping Center"

Prairie Lakes is a 107-acre master planned retail/mixed use development, located at the intersection of Highway 151 and Grand Avenue (Hwy C)

The Sun Prairie City Council's Public Works Committee has recommendeed a redesign of the Prairie Lakes Drive between Grand Avenue and Hoepker Road. Apparently the current "Le Mans Roadrace" design is not working. Whoever came up with the present design should not be allowed to have anything to do with future designs. They anticipate letting bids in Spring of 2014 for the realignment. Approximate cost to fix this design screwup is $550,000 but construction will not begin until the TIF for district 9 is extended.

Even with the realignment, if Marcus Theatres ever builds (don't hold your breath), that street is going to be miserable when movies let out.

Question: Could we have someone do an update on new business coming into the area as well as possible talks of what could be coming in?  Progress on Marcus Theater and Super Walmart?

Answer: Ya. That would be nice. You probably know as much as I do. I have heard rumors but too many times those rumors do not pan out so I do not post those. Marcus has had "Coming Soon" for years now. I really don't think new ground will be broken this year, for anything. Its getting too late. But, I could be wrong. Rocky Rocco, Which Wich and the Jewelry store will be in the same building with the Orange Leaf. As of today, I noticed that they have been working on the inside of that unfinished part of the building, putting up the inside of the outerwalls and insulation but they still do not have a poured floor yet.

Starbucks is going in the new building on the corner of Prairie Lakes Dirve and Grand Avenue with the drive through. Not sure how the Starbucks in the Target store just a couple hundred yards away, thinks about that. Probably dooms that outlet.

I expect that next Spring will be big in Prairie Lakes, if the economy stays the same or better. I hope some of the rumors pan out.

I don't know anything about the Super Walmart other than what I see when I drive by it.

According to their facebook page, Orange Leaf is opening Thursday, June 6th, 2013.
Prairie Lakes website updated some of the leases they have listed. No more Jersey Mike's, but they will have the Sport Clips, Forever Yours Jewelry, a Which Wich? sandwich shop, and a Rocky Rococo's. Still no word on the Marcus theaters.

While not part of Prairie Lakes Shopping Center, Aldermen approved the construction of a 4,366 square foot McDonald's restaurant with a drive-through facility on property located just North of Woodman's at 939 Bunny Trail.

Construction has begun in earnest at the Prairie Lakes Shopping Center. Heavy equipment was excavating and putting in sewer and water lines and laying out streets. 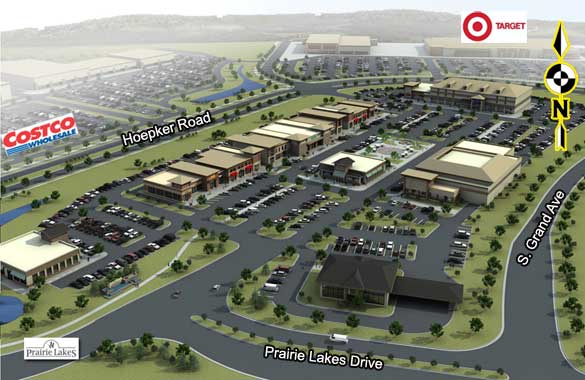 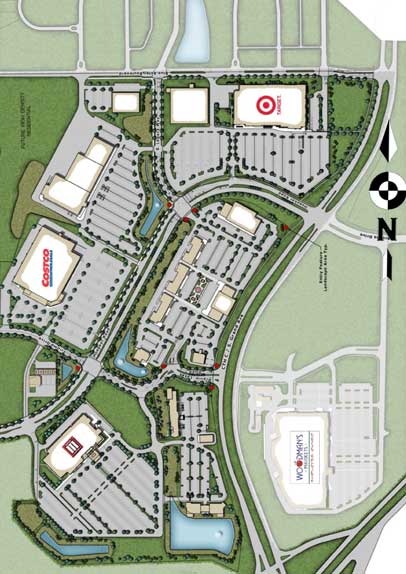 It has been announced, today, that the Sun Prairie Planning Commission will have a special meeting on May 23nd for consideration of approval of a PIP (precise implementation plan) to allow for the construction of three, single-story commercial buildings and associated parking within the Prairie Lakes development at 702 S. Grand Avenue. From this information, it looks like these building will butt up against Grand Avenue but have their entrances opposite of Grand Avenue and from the interior of Prairie Lakes. This development would seem to be starting the avalanche of stores in this area and may even prompt Marcus Theaters to go ahead with their Marcus Movie Theater project in Prairie Lakes. Prairie Lakes Shopping Center just has an ideal location for stores and restaurants, being so close to Hwy 151 interchange. The announced development may be be constructed in stages.

The picture, below is a representation of the building that will be presented to the Planning Commission.

7/11/2011 Update regarding the the large field on the Northwest corner of Triumph Drive and Hoepker Road.

The Sun Prairie Planning Commission representative says that "a potential retailer is doing some site investigation there. No application for City approval or anything filed yet. Don't know if they will move forward or not. Because nothing has been filed and all I have heard so far are rumors about who it might be, I am not really at liberty to mention any names."

Some of the "stakes" are circled in the photo, above. Target store in the background. 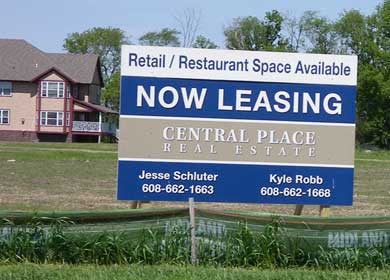 It looks like they may have stuck it rich in gravel, judging by the huge piles of gravel and stones. 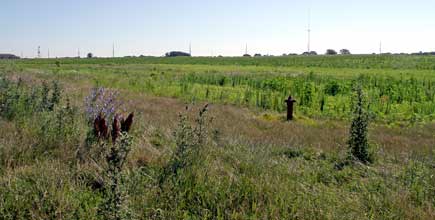 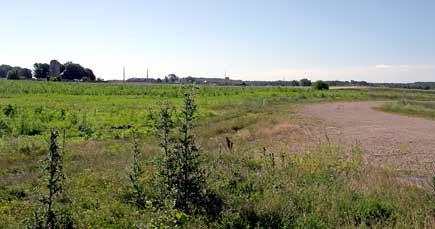 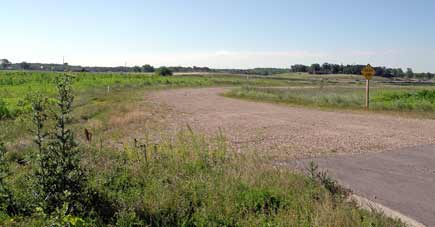