Cabela's grand opening in Sun Prairie will take place starting at 9:45 am on Thursday April 30th. The weekend will be full of special events. As of today, Cabela's still has job openings posted on their website. This will be a big weekend in Prairie Lakes as the Marcus Palace Cinema is opening on the same day.

It has been announced that construction is scheduled to be complete by March 1st, 2015 and the building will be turned over to Cabela's for stocking the shelves and getting ready for the grand opeing to be announced at a later time.

The Wisconsin State Journal reported today that Cabela's in Sun Prairie is scheduled to open in April, 2015.

Cabela's Sporting Goods store in the Prairie Lakes Shopping Center is going up.

Cabela's hunting and fishing outfitter announced on 10/24/2013 that they are planning on building a store in the Prairie Lakes Shopping Center in Sun Prairie. If all goes as planned, the store could open by sometime in 2015. Building could start in Spring of 2014. And there may be outlots for smaller stores or restaurants. (Possibly on the corner of Hoepker and Prairie Lakes Drive.)

Cablelas will be a great addition to the Prairie Lakes Shopping Center and easily viewable from Hwy 151.

More than 200 new jobs woud be created for area residents.

"Wisconsin has proven to be a Cabela's kind of place," said Tommy Millner, Cabela's Chief Executive Officer. "We have a history of success in our Prairie du Chien, Richfield and Green Bay locations and we couldn't be more excited to bring a store to Sun Prairie."

The new store would be 86,000 square feet and will be the fourth store for Cabela's, in Wisconsin.
The location will be on the former Marcus Theaters lot, roughly on the SE corner of Hoepker Road and Prairie Lakes Drive. Not exactly on the corner because the main lot is South of the intersection. This still has to go through the Planning Commission and the City Council. So, the Marcus theater for Sun Prairie is, for now, not a go but the city still has hope that something will develop in the future. There is still one big lot left, North of Costco, but I would much prefer a home improvement store, if I had a choice, because I go to home improvement stores more often than I go to movies. 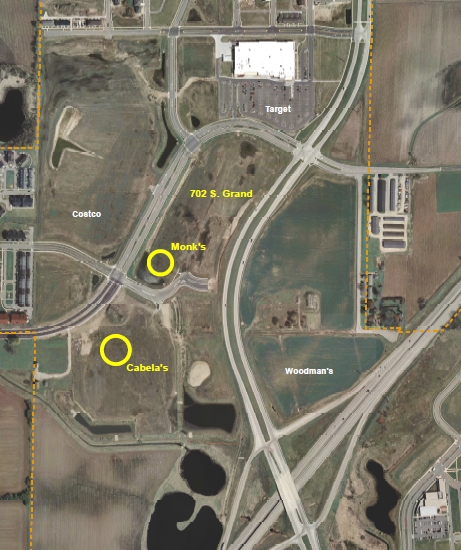 Founders Dick and Mary Cabela and Dick's brother James Cabela have retained 25% ownership of the now public company which trades under the stock symbol CAB.

About half of Cabela's sales come from hunting-related merchandise with about a third derived from the sale of firearms, ammunition and accessories in 2012. Additionally, in 2012 30% of revenue came from direct sales (through catalog and online orders), and 59% from physical retail stores. The remaining revenue came from its financial subsidiary and credit card business.

Cabela's has a distinctive look to it retail operations, a look which turns its retail stores into tourist attractions. The stores are more like cavernous showrooms, bringing the outdoors inside. They feature museum-quality displays of taxidermied wildlife, large aquariums, indoor mountains, and archery ranges. The success of the format is illustrated by the company's Kansas City, Kansas store at over 180,000 square feet, which attracted more than four million customer visits in one year. Currently, the largest Cabela's retail facility is in Hamburg, Pennsylvania, with more than 250,000 square feet of floor space.